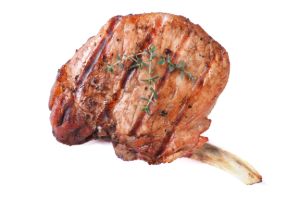 There has been quite the debate about what cuts of meat the absolute best. Some say it’s all about where the meat came from, whereas others will say it depends on if there’s a bone in it or not. Some even will say it doesn’t even matter, it’s all about how you cook it. However, the greatest debate is bone-in vs. bone-out meat.

One side will insist that steaks especially taste better with the bone left in. On the other side, people will insist it doesn’t make a difference and a good steak is a good steak. Each side has a fair point in the argument.

Many argue that a steak tastes better having a bone-in for a variety of reasons, but the biggest being that the steak has extra flavors from the bone. Essentially, when the bone is left in the meat, and the meat is cooked, the bone marrow leaks into the juice. Bones have yellow and red marrow in them, and the yellow marrow tastes delicious. In fact, cowboys used to call it prairie butter. This buttery flavor can seep into the meat as it cooks, making bone-in steaks taste better.

There is also the belief that leaving the bone in the meat as it cooks helps it to be more tender as it cooks. As the steak cooks, the bones take longer to heat up, which actually helps the steak near the bone to be more juicy and tender.

The Bone Out Argument

On the other side, is those who believe there is no need to leave a bone in the meat, and that it tastes the same. Studies have shown that cow bones are not permeable, which means that the marrow is not likely leaking into the steak and therefore you are not getting any extra flavor from the bone being in than you would get from taking it out. There is also a layer of collagen between the bone and meat, ensuring that no flavor is going to seep through from the bone.

So that begs the question, which way is the best way to cook a steak? Scientifically, the bone-out side is correct, there is no real difference in taste from those bones that are bone-in or bone out. On the other hand though, bone-in steaks tend to keep their shape a little better, which some people may prefer. However, when you leave the bone in, you are less likely to get a crisp browning on one side of your steak, which may be a con to some steak lovers.

The ultimate result of this debate is that it’s a personal choice. If you think that bone-in steaks tend to taste better than their bone-out counterparts, then you should continue to grill up bone-in steaks. However, if you prefer other cuts that don’t have the bone, then you should continue to order those instead. Depending on how you season and cook it, you can whip up delicious steaks for a variety of occasions, and no one will question if they have the bone or not.