The Best Meats for Unforgettable Chili 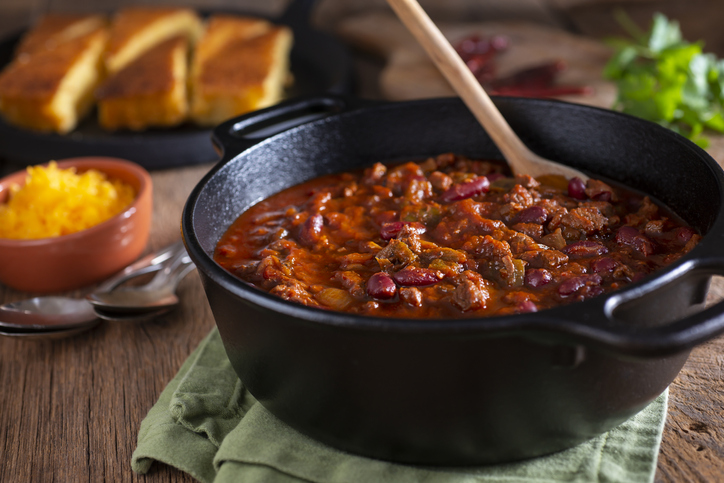 With that one simple word for one of the most recognizable dishes worldwide, you can quickly start a passionate chili cook or expert debate about what makes a chili, chili, and what ingredients are best. While we don't believe any one recipe is better than the other, as what makes a good dish comes from the ingredients and love behind it, we have a few suggestions on the best cuts of meat for chili.

As the weather turns toward cooler temperatures, many of us are looking forward to the special treat of delectable stews, stick-to-your-ribs soup, and the legendary chili! This spice-filled dish that can range from mild to hot can be made into an endless number of varieties.

But where exactly did this dish come from? What kind of cuts of meat makes this dish? Which cuts are more authentic than others?

Let's dive into everything about chili to help take your next batch to a new level!

Many of us may still believe this dish originated in and came from Mexico. There are, unfortunately, no specific markers in history that can pinpoint for sure where it came from. One of the popular tales we do know is one of a Spanish nun. According to an old Southwestern US, Sister Mary of Agreda of Spain or "La Dama de Azul," the lady in blue was the first to put a recipe for chili con carne to paper in the 17th Century. It claimed that Sister Mary wrote down the recipe that called for venison, or antelope meat, onions, tomatoes, and chili peppers.

In the 18th century, a group of sixteen families emigrated from the Canary Islands to Bexar, the villa of San Fernando de Bar (now known as the city of San Antonio). They emigrated to Texas from the Spanish Canary Islands and founded San Antonio's first civil government, which became the first municipality. According to historians, the women of those families made a spicy "Spanish" stew similar to what we think of as chili.

Records found by Everrette DeGolyer (1886-1956), a Dallas millionaire and a lover of chili, indicated that the first chili mix was concocted around 1850 by Texan adventurers and was a cowboy staple for hard times when traveling to and around the California gold fields and in Texas itself. No doubt these cowboys needed hot grub, and trail cooks came up with a type of stew. The stew consisted of pounded dried beef, fat, pepper, salt, and chile peppers into stackable rectangles that were efficiently rehydrated with boiling water. These were bricks of chili that could be boiled quickly on the trail.

Other sources say that the Chili Queens of the 1880s San Antonio, a then wide-open cattle town, were the sources of this hearty stew. In an article published in the July 1927 issue of Frontier Times, Frank H. Bushick, Commissioner of Taxation, reminisces about the Chili Queens and their origin.

The chili stand and chili queens are peculiarities, or unique institutions, of the Alamo City. They started away back there when the Spanish army camped on the plaza. They were started to feed the soldiers. Every class of people in every station of life patronized them in the old days. Some were attracted by the novelty of it, some by the cheapness. A big plate of chili and beans, with a tortilla on the side, cost a dime. A Mexican bootblack and a silk-hatted tourist would line up and eat side by side, [each] unconscious or oblivious of the other."

Regardless of its true history, chili or chili con carne has become deeply rooted in the American West and all over the country. Wherever this unique dish originated from, let's pick the best cuts of meat for a fantastic meal.

The Best Cuts of Beef for Chili

Most chili lovers will tell you that this is the ideal cut of meat for stew and chili. Chuck is initially a very tough cut of beef, but when you consider the fact chuck is highly marbled, it turns out this is perfect for the low-and-slow way to cook the perfect Texas chili. The marbled fat slowly melts, adding unmistakable flavor to your chili while the meat will turn fall-apart tender after several hours.

This massive cut of beef we may be more familiar with as barbecued, braised, or smoked. But if you cut it into bite-sized pieces, this cut works surprisingly well for a chili. The best bet here again is to look for a very well-marbled cut of brisket and cook it low and slow so that you can deliciously shred it apart with a fork or spoon in a few hours.

There's no shame in using ground beef either—we feel it's important to remind you! As chili recipes differ from city to city, family to family, what works for one person or area may not work for another. Ground beef is an immensely versatile, excellent addition to any chili and happens to be one of the quickest to cook and least expensive options of them all. That means you could cook a large amount of chili to feed your entire family for less. Yes, we do recommend that you simmer the dish still for a long time—that's the best means to make sure your chili is full-flavored—but you also don't have to worry about the tenderness of ground beef.

For those of us who may not be too fond of the texture or flavor of beef, you can use ground turkey or chicken for a protein substitute that is just as delicious.

Remember that while these are considered the best cuts of meat overall, we encourage you to experiment with your cooking and try out new meats or new flavors you might not consider! When it comes to the largest supply of the conventional and rarer cuts of the freshest meats and seafood online, Wholey is happy to be able to serve you and your chili tasting needs!