Tapas - The Something for Everyone Dish 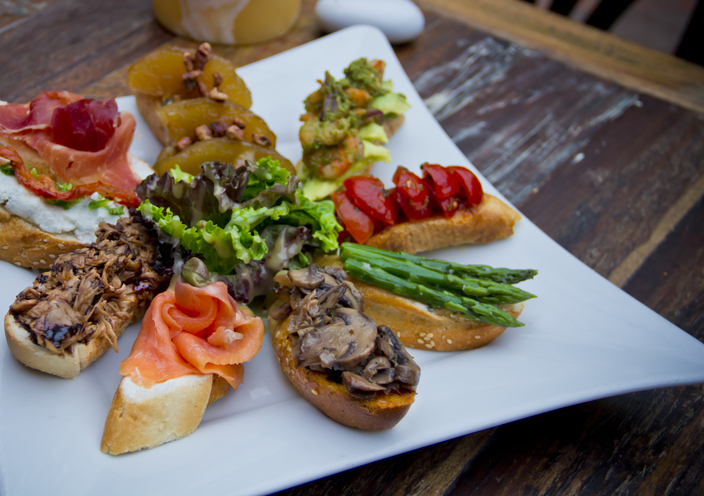 Have you enjoyed any great Tapas lately? If you aren't sure what those are, don't worry. A tapa is an appetizer or a snack in Spanish cuisine, so while you might not recognize the word, you've undoubtedly enjoyed tapas before. In many bars in Spain and across the globe, tapas have evolved into a cuisine that can be as uncomplicated or as sophisticated as you like, and in other cases, combined to create an entire meal. In some Central American countries, tapas are known as Bocas, and in parts of Mexico, similar dishes to tapas are called botanas.

Tapas can be as traditional or as eclectic as today's global fusion cuisine, which is great news for all, as tapas can offer something for everyone!

Where did tapas Originate?

It was within Andalucia, a Southern province of Spain, that tapas began. The word tapas is derived from the Spanish verb, 'tapar,' which translates into ' to cover.' Tapas were most likely considered a traditional, complementary piece of sliced ham served on top of a glass of wine. In pre-19th-century Spain you would find tapas served by posadas (Inns), albergues (Hostals), or borgegas (a wine bar or tavern that served wine exclusively) that offered rooms and meals for travelers. Few innkeepers and few travelers could read or write at the time, so inns offering guests samples of the dishes available, on a 'tapa,' (the word for pot cover in Spanish) was an effective way of both advertising and offering guests a choice to what they could eat.

The Joy of Cooking, one of the most published cookbooks in the United States and print since 1936, states that the original tapas were thin slices of bread or meat which sherry drinkers in Andalusian taverns used to cover their glasses in between sips—a practical measure to keep flies from hovering over the sweet sherry.

According to The Joy of Cooking, if meat was used, it was either ham or chorizo, with are both known to be very salty and help activate thirst, which in turn would help increase bar, inn, and hostel owners alcohol sales.

Tapas now incorporate new ingredients and influences every day. Today, some tapas can be as simple as the Roman-influenced olives and chips or as extravagant as delicate quail drumsticks or Japanese-Peruvian Fusion Delicatessen Gua Baos.

If you're interested in trying your hand at creating some Tapas of your own, you're in luck! Below, we'll share some ideas on some of the easier tapas to try at home that you might just love!

Chorizo (Spanish sausage) cooked in wine. Chorizo al vino is a delectable treat that turns out a flavor that is both smoky and savory. The sausage, infused with paprika and garlic, becomes richer and fuller thanks to it being braised in Spanish red wine.

Perfect for vegetarians or those looking to simply cut down the amount of meat they eat in a week. But just note, if you're going to try pimientos de padrón, make sure you have a tolerance to spice! These small green peppers from Galicia range from sweet to extremely spicey, as the growers simply scatter pepper seeds in a row so that there's no way of knowing what you'll get with these peppers. These adventurous peppers are fried in olive oil, seasoned with plenty of sea salt and nothing else; as you can imagine, they don't need any added spice!

Another wonderfully versatile Spanish tapa is the empanada. The Spanish word for this delight comes from "embreaded," and the fillings can be anything you can think of, wrapped in a crispy, delicious bread. Empanada recipes can be found as far back as the 16th Century, and these tasty turnovers are still extremely popular and recognizable. The most traditional empanada you can find or make in Spain is called the empanada gallega, which contains sofrito and tuna.

Ham croquettes are a staple of Spanish tapas worldwide. You can make them at home using Spanish cured ham, and these small, lightly breaded, and fried béchamel fritters aren't hard to create or snack on! Eat them as is, or pair them with a glass of your favorite beer or wine as you might in Spain. They can also be made ahead and then frozen for whenever you need a snack at hand or something quick for guests!

Our favorite and one of the most popular Tapa Dishes

This is an easy yet classic dish you might find at most Spanish restaurants. This Spanish garlic shrimp is popular for a very good reason! Plump, juicy, tender shrimp swimming in tasty olive oil and earthy garlic sauce. It is bright, garlicky, spicy, and rich in the best of ways. Even better? If you have any crusty bread, it is a pair made in heaven!

But possibly the best thing about Cambas al Ajiilo? It usually takes roughly 10 minutes to come together, so if you're hungry and in a hurry, this may be the perfect tapas for you!

Whichever tapas you decide to try, we at Wholey hope that we can help you be as passionate about and joyful about fresh food from all over the world. When it comes to convenience and meal ideas, food facts and the freshest cuts of meat delivered right to your door—we'll be here for you!