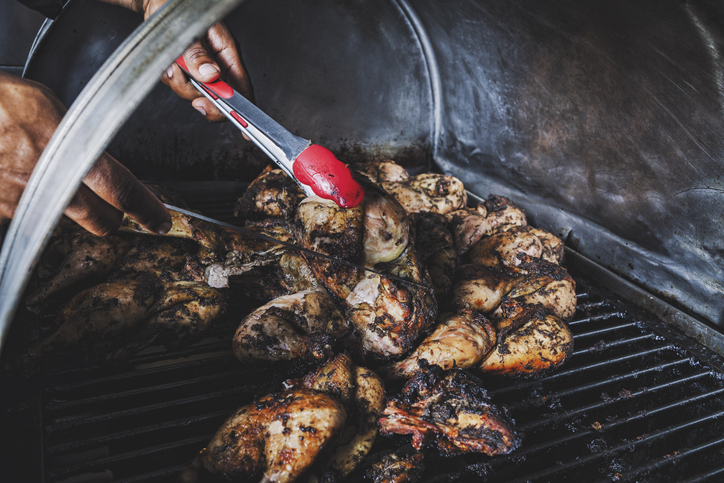 Jamaican cuisine is as unforgettable as the traditions, people, and places they came from. Jamaican cooking consists of using a wide variety of cooking techniques, flavors, and spices, all influenced by various areas. Influences include Amerindian, African, Irish, English, French, Portuguese, Spanish, Indian, Chinese, and Middle Eastern people who inhabit the island. It is also heavily influenced by what crops were introduced to the island from tropical Southeast Asia which, are now grown locally in Jamaica. There's also a wide variety of seafood, tropical fruits, and meats used in every recipe.

Jamaican cuisine is a reflection of a breathtaking island bursting with culture and adventure and one of the hottest destinations for food lovers around the world. You don't need to travel to Jamaica to enjoy some of these outstanding, traditional dishes. All you need are the right ingredients, time, and patience to create these classic, flavor-packed foods right at home.

This Jamaican pastry can contain various fillings and spices, baked inside a deep golden, crispy, flaky shell. The shell's deep golden color is often from tinting with a mixture of egg yolks or Tumeric. Created like a turnover, but far more savory and usually contains meat.

The pastry for the patty is easy to make at home. It only requires flour, butter, turmeric, curry powder, salt, and ice-cold water generally. There are variations to the pastry shell too, of course, some call for beef suet instead of flour or lard instead of butter or suet, so feel free to try which one suits your tastes.

The best choice of meat to use for a Jamaican beef patty is lean ground beef, although there are plenty of other variations that work too, such as chicken, vegetables, fish, shrimp, pork, lobster, soy, ackee, or even cheese. But for the most effortless filling, we recommend using ground beef. What sort of spices works well? Here's a general basis of spices that can be adjusted according to your tastes:

To prepare the patty filling, set a large saucepan on your stove over medium-low heat. Add your lean ground beef with 1 cup of beef or beef bone broth and olive oil. Cool and simmer for 20-30, until most of the liquid is absorbed or evaporates. Next, add in the onions, garlic, peppers, paprika, thyme, allspice, and stir to combine well. Last, add in breadcrumbs a bit at a time to make the mixture thicker. Just enough to absorb any excess liquid but not so much that the meat becomes dry.

Once this is finished, you can begin filling in your choice of pastry and bake to enjoy!

Jerk-style cooking is one of the more famous stars of Jamaican cuisine. This type of cooking has roots from the island that date as far back as the 1600s when maroons would use this method of cooking on the wild boars hunted and caught in the hills. Now, you can find jerk chicken or jerk pork in almost any restaurant, street-side metal drums, or in your local grocery store. In Jamaica, jerk chicken or pork is a late-night favorite and is often served in foil with bread or festivals—a slightly sweet, cylinder-like shaped johnnycake (or dumpling.)

The critical base for Jerk Chicken or pork is to use plenty of salt, scotch bonnet peppers, and allspice. Additions such as onions, scallions, thyme, black pepper, cinnamon, and nutmeg can be used as well if you have them.

While the seasoning is essential, the wood the meat is smoked over makes the difference for a more authentic flavor. You want to smoke the meat over pimento chips for a more genuine taste of original Jamaican jerk chicken or pork.

You will want to use either two while 3-4 pound chickens, quartered, bone-in, or at least 5 thighs and 5 legs for the meat.

Pepper shrimp is another street food popular in Jamaica. Born in the Middle Quarters, a village in the Parish of St. Elizabeth, next to Black River, where the shrimp are fresh-caught. They're often referred to as crayfish, the river shrimp are small with tender shells, and you can eat them whole.

For this recipe, we recommend using Gulf wild shrimp for a close to fresh-caught flavor as possible. Next, of course, is using at least three scotch bonnets. However, if you aren't tolerant of spice, using less spicy peppers should be just fine, like jalapenos, for example. Bell peppers add sweetness, while garlic, thyme, salt, onion, vinegar, and allspice.

Chop the peppers and add them into a medium bowl with your shrimp, bell peppers, onion, thyme salt, and garlic and let marinate in the fridge for at least 30 minutes up to overnight. Next, remove the marinate from the fridge, remove the shrimp from the marinade, and scrape as much off the shrimp as possible. Next, add a little water or vegetable broth to the marinade and transfer it to a skillet large enough to hold the marinade/sauce and to cook your shrimp in a single layer. Bring to a simmer over medium heat, add allspice berries and then cover and cook for at least 15 minutes. Next, add your vinegar and leave uncovered for about 2 minutes more, and season with more salt if you think it needs it. Remove the shrimp from the sauce, and voila! Serve them warm or at room temperature. Peel if needed and eat at the table!

We can't forget to mention some of the other favorite Jamaican meat dishes that we love, and you might, too.

We hope that we've inspired you to taste your way around the world. For us, food is so much more than just what we eat! It is a way of life, culture, history, and family traditions. Let us help you explore all these things and more with the freshest cuts of meat and rare, flavorful foods delivered fresh to your door today!