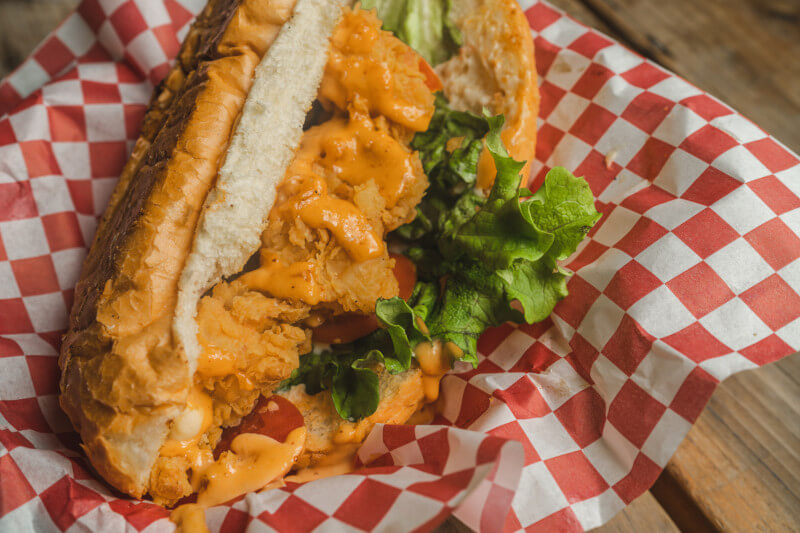 Call it a poor boy sandwich, or a poor boy, po boy, or even po'boy. Whichever name you like to call it, the history of where exactly this iconic sandwich came from is surprisingly controversial and steeped in New Orleans' racial and economic culture. Historians and experts alike can at least point to a few historical sources from where it is assumed the original sandwich may have originated.

Where ever it came from, one thing experts all agree: New Orlean's is the best place to get yourself a po'boy sandwich. But for those of us who have never experienced this flavor-rich and historical meal, what exactly is a po'boy sandwich? What makes it a po'boy? Why is it unique?

When it comes to the history of all things food, we love exploring. So come with us as we dive into this iconic food.

What is a Po'boy Sandwich?

The po'boy sandwich is a traditional sandwich that originates from Louisiana; that much is certain. The sandwich itself almost always showcases some meat, like roast beef, or seafood such as shrimp, crawfish, fish, oysters, or crab as filling. The meat is served on New Orleans French bread, which is famous and distinctive for its crisp crust and soft, fluffy center.

The po'boy can be ordered 'dressed' in most places. A dressed po'boy refers to adding lettuce, tomato, and mayonnaise (or any other type of sauce if available) on the sandwich along with the meat.

The sandwich is as diverse as the city of New Orleans itself, as today not only can it be found stuff with traditional meats and feature fried eggplant, French fries, ham, and cheese. There is even a Vietnamese version known as the 'pho boy,' filled with the ingredients commonly found in the national noodle dish (minus the noodles.)

History of Feeding the "Poor Boys."

Before this traditional sandwich existed, the iconic New Orleans French bread as a sandwich was standard. It was in 1929that the first official mention of a poor boy sandwich originated from the Martin Brothers' French Market Restaurant and Coffee stand. The Martin brothers, Bennie and Clovis, had moved to New Orleans from Raceland in the mid-1910s. Both brothers had worked as streetcar conductors until the early 1920s when they opened their coffee stand and restaurant in the French market.

Coffee stands have been part of the French Market for a very long time. The Martin brother's inclusion of a restaurant drew in their fellow streetcar workers and union members. When the carmen went on strike in 1929, Bennie and Clovis pledged to give the carmen free meals until the strike was resolved. The Martin Brothers claimed that to ensure they fulfilled their pledge, they created a unique sandwich they called the "poor boy." They worked with a bakery that supplied their French bread to standardize the size of the loaf since, at that time, a loaf of French bread often varied in length and width. This resulted in a loaf without a 'nose,' or a narrow end that created waste when having to cut the bread. With its crunchy exterior and soft interior, this newly resized French Bread was the perfect size to serve large, fulfilling sandwiches for hungry strikers. The Martin brothers claimed that when a striker came to get a sandwich, they would call out, "here comes another poor boy," as the striker approached and the phrase soon became associated with the sandwich itself.

The controversy around the origins of the term 'poor boy' still surfaces frequently when discussions of the sandwich's origins arise. Some argue that the term poor boy was a corruption of the French phrase pour bourre, which translates as "for tips." This story says that Ursuline nuns gave their French bread loaves tips out to beggars in the late 1800s. However, no documentary evidence currently exists in newspaper articles or restaurant menus from this period.

Poor boy sandwiches have become an emblem for New Orleans and the Creolization expressed through New Orleans' wonderful foods no matter how you call them. If you'd love to try your hand at making one for yourself, we have the perfect recipe for you!

For the Fried Shrimp:

To Assemble the Sandwich:

For the Fried Shrimp: