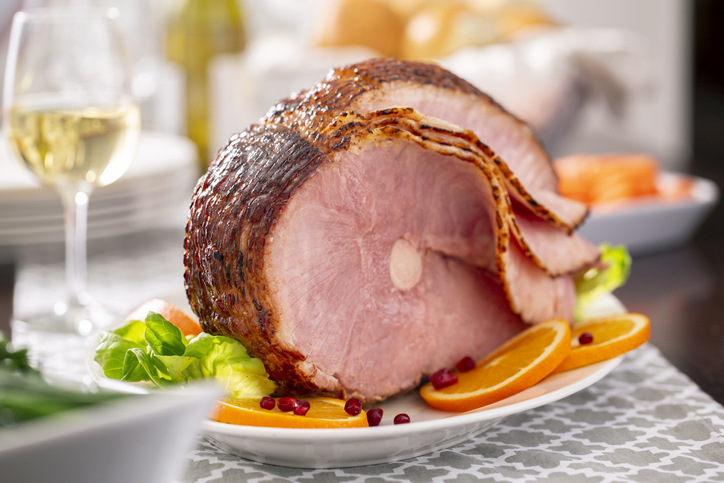 "As the world for many fades from snowy white to fresh shoots of green and pastel shades of new flower buds have grown, Easter is celebrated by many worldwide. Holiday tables will most likely see unique Easter dishes, traditional and fresh, with bread, dessert, and sweets for the occasion too. One common dish ingredient appears to be more common across the globe—except within the United States—and that is lamb.

For many Christians, the lamb is a religious representation of Jesus sacrificing himself on the cross, Jesus being known as "the lamb of God." But within North American homes, it's the Easter ham that is commonly served instead of lamb. So, why did the U.S. move away from serving lamb on Easter? Why do so many of us eat ham for Easter? The move from lamb to ham as the main Easter dish in America had a few causes, and while we ended up with our own uniquely American take, our traditions began in the same place.

Traditions
Roast lamb as a meal for Easter has its roots within Passover. Like many things within Judaism, serving lamb at the Seder depends on a family's tradition. Ashkenazi Jews, for instance, do not typically eat lamb for Passover, while Sephardic Jews do. Roast lamb for Easter began as part of Passover, Pesaḥ or Pesach, in Judaism. Passover is a celebration commemorating the Hebrew people's liberation from slavery in Egypt. The holiday itself originated in the Torah, where the word Pesach refers to the ancient Passover sacrifice (known as the Paschal Lamb), where God passed over the houses of the Jews during the 10th plague on the Egyptians. It is believed that when some Jewish people converted to Christianity, the tradition of eating lamb was carried with them, and that tradition traveled to the Americas.

Lamb is a Tricky Meat
If you've ever traveled to New Zealand or Eastern Europe, or your family originates there, you'll find lamb, especially during the spring, plentiful and on the tables of many. Yet, for all its popularity in other countries, lamb never quite reached the same levels within America. In 2021 according to OECD data (1)  it was estimated that only 4.6 kilograms or 2.2 lbs of sheep or veal is consumed by Americans per capita. Meanwhile, averages for beef remain around 26 kilograms or 57 lbs. per capita, while chicken remains top of the list. Lamb prices within the United States also remain high. In addition to steeper price points for lamb, cooking it can be tricky. When it is cut and appropriately cooked, lamb is a juicy, succulent and flavorful meat.

However, to get that perfectly done, juicy piece of lamb meat, it's essential to know the cuts of the lamb because some muscles within the animal are more worked than others, meaning each cut cooks differently. Most consumers within the U.S. aren't as familiar with cooking lamb at home. Along with understanding how the cuts of meat affect cooking and learning how to cook, there is a notable gamey flavor in lamb shanks and cuts from the shoulder joints that may be an acquired taste for some.


Lamb and Wool
Lamb used to be far more common within the United States when sheep were the only source of wool, which made them a high-demand animal. Inventory data on sheep within the U.S. began in 1867 when it was estimated there were approximately 45 million sheep within the United States. As we learned to create synthetic fabrics, roughly around the 1940s, sheep and the need for their wool were no longer needed for the WW II uniforms, and the need for owning sheep began to decrease drastically. Additionally, it is believed that the military rations of canned mutton (the mature sheep) during the war killed much of America's appetite for lamb meat a bit. No doubt, after living off mutton for years, U.S. soldiers probably vowed not to eat it again. Since then, the numbers have declined. It was reported in 2021 that there are now about 5.17 million sheep and lambs within the U.S. In comparison, there are roughly 101 million of all cattle and calves within the country and about 74.77 million hogs and pigs.

What does that mean for lamb meat? It means that lamb meat is rarer to acquire, less in demand, and higher in price compared to beef, pork, or chicken.

Curing Times and Ham
With lamb waning, the opportunity for another kind of meat to take center stage during Easter opened up. Traditionally, farmers would slaughter pigs in the fall when it became cold enough that fresh meat could stay fresh in the low temperatures as it was broken down. As there was no refrigeration at the time, farmers that set aside meat to feed their families needed the means to preserve them. Farmers would cure the meat throughout winter using salt, smoke, or air-drying methods. Come springtime, the ham set aside to cure would be ready to consume in early spring—usually around the time of Easter, which made it an easy and available option for many North Americans to move to after lamb.

So, Why Do So Many of Us Eat Ham for Easter?
It turns out the reason why most North Americans reach for the cured ham during Easter stems from practicality, availability of meat, and tastes. Today, there are plenty of reasons why ham remains popular. Not only is it readily available, but it comes in an array of options—honey baked, smoked, country, glazed, spiralized, bone-in, boneless, and more. When it comes to ham, they provide far more meat than lamb, making a ham easily serve a crowd or a large family. There are options to buy ham fresh, frozen, prepared, or ready to customize with your own family's ham glazes and cooking methods. Ham first became a tradition for Easter for many out of necessity and changing tastes and then became the new Easter tradition for families across the states. Consider us when looking for the perfect ham to continue your family tradition this Easter! We love making mealtime easier and more convenient than ever at Wholey's. Get your delicious Easter ham delivered fresh to your front door today!