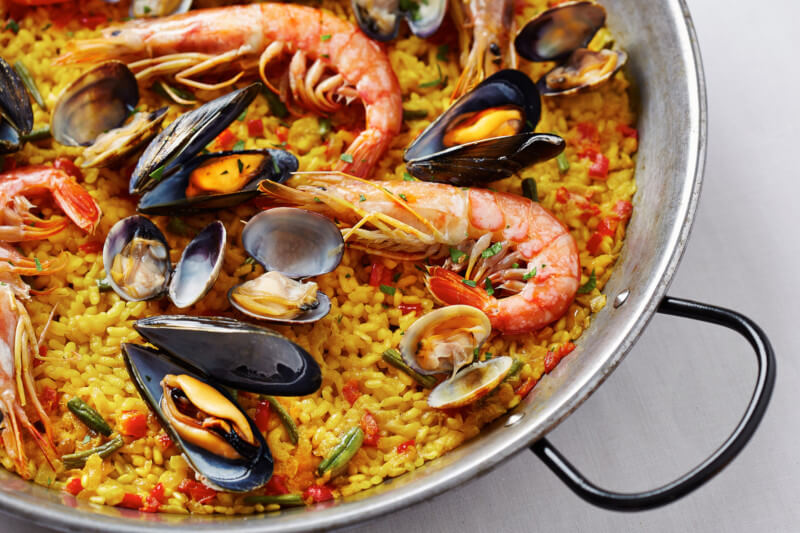 When we mention paella, what comes to mind? Is it the bright and fluffy yellow rice dish, topped with red peppers and loaded with a wide range of seafood from shrimp to chorizo, lobster to clams, chicken thighs to calamari rings? Would you be shocked if we told you that each of these dishes is considered paella?

Paella, which is a dish that originated in Valencia, is a dark, rich, and smokey creation. The perfect paella should be denser than a pilaf, drier than a risotto, and have more complex flavors than either. What goes into a paella that makes it authentic? Now that is where the controversy begins. Although one thing that can be wholly agreed upon by many, including the chefs in Valencia, is that all paellas start with a sofrito, or a flavor base that usually consists of chopped vegetables cooked in oil, commonly garlic and tomatoes, sometimes with onions and Spanish red peppers called ñoras. The longer the sofrito is allowed to cook, the darker and more intensely flavored the paella will be. Another unanimous agreement is that once the rice has been stirred into the cooked sofrito and the stock, you leave it untouched and uncovered. When the rice is cooked through, roughly 20 minutes, some chefs will blast the heat to create a flavorful crust, called socarrat, on the bottom of the pan.

So, with these tips in mind, we'd love to share with you a perfect paella recipe base for you to try your hand at. As this is such a versatile dish, with variant meats and rice used—feel free to experiment with the below to find your perfect paella too.

We'll preface this by saying that for the faithful, authentic paella experience and flavor, it should be cooked in a special paella pan over an open fire. However, not everyone can do so. In this instance, you can recreate some of that authenticity if you are lucky enough to have a gas stove. Additionally, you may not want to purchase a single specialized pan to cook paella in. In that case, here are some fantastic alternatives that will be just fine for your paella:

Last but never least, this recipe's measurements are taken from an ancient, recognized recipe for original paella and makes 10 servings, and is considered a communal dish.

To serve the paella the traditional way, the paella pan is placed on a table, and your guests are encouraged to scoop up their portions with spoons to get plenty of pieces of delicious meat, vegetables and to scape up some of the chewy, caramelized socarrat, working around the edges and slowly eating toward the middle.

This wonderful authentic dish can be cooked in a variety of other means more modern as well, such as using a wood fire stove or grill and using seafood as well as chicken, or seafood alone. Are you wondering where to get the freshest, most convenient rabbit meat to make this dish more traditionally? You've come to the right place!

When it comes to the choicest and most mouth-watering cuts of meat and rarer meats, Wholey's has your back with exceptional and convenient delivery right to your doorstep. When it comes to all things food, from the quality, delivery, customer service, and how to cook it and enjoy it, we love everything we do. We hope you enjoyed learning how to make the perfect paella as close to the original way as possible.