Bring the Carnivale to you with Mardi Gras Recipes 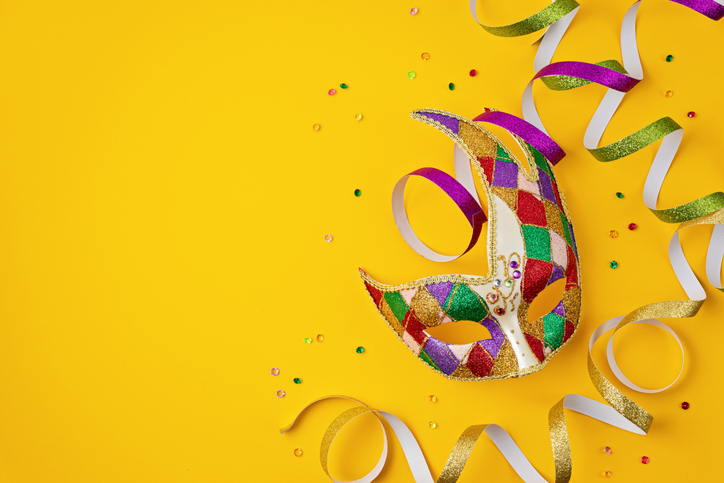 Believed to have arrived within North America on March 3rd, 1699, French-Canadian explorer Pierre Le Moyne d'ilberville camped 60 miles downriver from the future site of New Orleans—Mardi Gras or Fat Tuesday has become a legendary Carnival celebration. This year, for whichever reason, if you aren't able to make it to the Big Easy or New Orleans but are craving the traditional Mardi Gras meals and food, why not celebrate at home?

There are so many beautiful dishes to choose from for a Mardi Gras meal that we probably won't be able to cover them all, but we hope you enjoy these suggestions to explore and try for yourself!

Gumbo, instead of Jambalaya, is more of a stew thicked with a roux and made with chicken, sausage, and, or seafood. While these two dishes are often made with similar meats and vegetables, the process of making them and the flavor profiles of the result is entirely different. The key to fantastic gumbo? It's all in the roux. A roux is made with just two ingredients, flour, and oil. The flour and oil are cooked and stirred together for about 30-45 minutes until it becomes dark brown, almost like dark chocolate and the consistency of dough. The roux is what adds a deep, rich flavor to gumbo and its thick, hearty texture. A good roux is indeed a labor of love, but it pays off in a mouth-watering gumbo that you, your family, or dinner guests won't soon forget!

Étouffée or etouffee is a dish found in both Cajun, and Creole cuisine served with shellfish over rice. Étouffée means smothering, a popular cooking method in the Cajun and Creole areas of southwest Louisiana and extremely popular in New Orleans, making it a must-try or must-have dish for a Mardi Gras inspired home meal. Crawfish season in Louisiana signals the arrival of spring, and in the case of the Creole version of crawfish étouffée, it's made with a blond or brown roux with tomatoes being sometimes added, while the Cajun version often omits tomatoes.

If you don't have hours to cook or hours to wait, you can make delicious red beans and rice New Orleans style in a crockpot or in an instant pot to save time without sacrificing authentic taste. The great thing about making red beans and rice is how versatile it is while remaining flavorful and hearty, even if choosing to cook them on the stovetop.

Soaking the beans is the first step to making a great dish, but if you're using an Instant Pot, you can rinse them and go. No matter which recipe you find for Instant Pot red beans and rice, try removing a cup of the beans once they are tender, mash them with a fork or potato masher, and stir them back into the pot for a creamier consistency. Don't forget to pair red beans and rice with a savory, moist cornbread.

Thanks to Italian immigrants who settled in New Orleans, the muffuletta or muffaletta is a type of round Sicilian sesame bread and a famous sandwich using the same Sicilian bread. What sets this meat and cheese sandwich apart is the spicy, tangy olive salad. A genuine muffuletta should be made on oven-fresh Italian bread topped with sesame seeds and feature Genoa salami, sliced cooked ham, and cheeses like mortadella, mozzarella, and provolone.

Ingredients for the olive salad can differ according to who makes the sandwich and your tastes, but generally, it's a combination of green olives, kalamata olives, garlic, cauliflower, capers, celery, carrot, pepperoncini, cocktail onions, and seasoned with celery seed, oregano, basil, black pepper, vinegar, olive oil, and canola oil.

Looking for a scrumptious, simple shrimp recipe that you can whip together in your favorite skillet? Something that just says Mardi Cras and New Orleans all over it? Look no further than a Cajun Shrimp Skillet. All you need to make this dish is some uncooked rice, chicken broth, jumbo shrimp, garlic, and cajun seasoning. You can create your own Cajun seasoning by mixing these spices:

For extra spicy Cajun seasoning, consider adding to the above:

Soft, pillowy, light, and covered in their signature powdered sugar. The New Orleans Beignets have become synonymous with the area and Mardi Gras. This heavenly, feather-light fried dough can be found in almost every patisserie in New Orleans, dubbed as the official state doughnut of Louisiana. These rectangular treats are deep-fried, light, and puffy, made with year dough with just a touch of sweetness dusted with powdered sugar, and heavily tied with Mardi Gras. You can quickly deep fry these at home or choose to bake them if you're trying to cut back on oil but still want that authentic New Orleans beignet experience.

We can't say Mardi Gras and not immediately follow up without suggesting a homemade King Cake. The iconic glittery gold, purple, and green Galette Du Rois take a bit of time and patience, but it's all so worth it when it's ready. It's thought that the King Cake tradition was brought to New Orleans from France in 1879. A King Cake is an oval-shaped bakery delicacy described as a cross between a coffee cake and a French Pastry that is as rich in history as its flavor. The three famous colors are royal. Purple signifies justice, green for faith, and gold for power.

When you're ready to try classic Mardi Gras recipes, Wholey's is prepared to deliver! Order today to get the most delicious cuts of meat, seafood, andouille sausages, and more right to your front door to make every meal easy and memorable for you, your friends, family, and guests.